We supply the best national teams in the world with our waxes. Officially ZIPPS Skiwachse is the supplier of the German national ski teams. In the last winter we supported numerous athletes on their way to the podium and to gold. 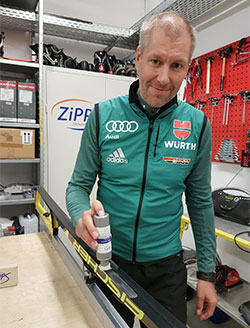 Andreas Emslander is the senior wax technician of the German National Team Biathlon. And here is what he says about ZIPPS waxes:

Patrick Pigneter is the the top leader among the world`s elite natural-track sliders. He is the most experienced and most successful athlete in his sport and has won all available titles, most of them a number of times.

And there is Thomas Kammerlander from Austria, he has won the last two World Cups.

We are proud that we have been able to support those great athletes with our ZIPPS waxes. And we support "Luge on natural track on the way to Olympia", of course.

Cross Country: Per Kristian Nygard (NOR)

Since 2005 Per-Kristian Nygard, cross-country skier from Norway, has been successful with ZIPPS waxes. And his ranking became better from year to year. In winter 2016/17 he achieved one of his aims: he represented his country as a participant in the Norwegian National Team. And in 2018 he bacame Norwegian vice champion (15km, FT), only beaten by the man, who won the gold medal in the Olympics. Of course he used ZIPPS waxes in this important competition.

Philipp Schädler from Allgäu (a southern region of Germany), is one of the best skimountaineers in the world: He was Vice-Champion in the German Championship 2015 and 1st in the International Championship of Canada 2015. Ski mountaineers not only look for alpine challenge. They need to go up and down the hills as fast as possible. And so they need fast und durable waxes. In 2015 Philipp started using ZIPPS waxes. And now he is convinced: This was a very good decision.